The 10 Most Popular Cocktails

The 10 Most Popular Cocktails

A couple of the most challenging things about being a bartender are remembering the ingredients in cocktails and the best cocktail glasses to serve beverages in. Every drink is made differently and served in a specific type of glassware so your guests can properly enjoy the taste of their beverages. We’ve created this informative guide to provide you with interesting facts on the 10 most popular cocktails and how to prepare each beverage.

The Old Fashioned was invented by James E. Pepper in 1880. He was a bartender in Louisville, KY and took his recipe to New York City which is where the drink began to gain popularity. Fast forward to today, the Old Fashioned is one of the most popular cocktails in the United States and Louisville has named the drink as its official cocktail. During the first two weeks of June, the city celebrates “Old Fashioned Fortnight” which is when a number of bars host cocktail events and have drink specials. 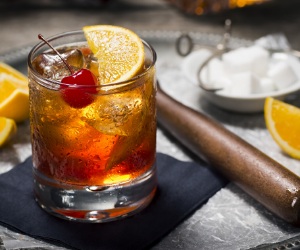 How To Make An Old Fashioned

Sophie Berezinski and her father owned a copper factory in Russia. She created the design for the company’s copper mugs but she was having trouble selling the mugs. She decided to move to the U.S. with over 2,000 solid copper mugs to see if there was a market for them. In 1941, she walked into the Cock ‘n’ Bull pub and met John Martin and Jack Morgan. Martin owned Smirnoff Vodka distillery and Morgan was trying to introduce his ginger beer to America. The three of them worked together and created the Moscow Mule which was a combination of vodka and ginger beer that was served in a copper mug.

How To Make A Moscow Mule 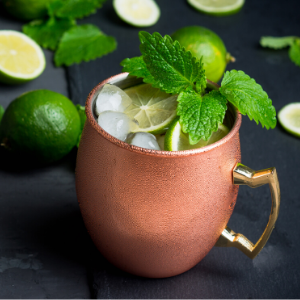 Moscow Mule glasses are made from copper which helps drinks stay cool for longer periods of time. These mugs are typically between 12 to 18 ounces in capacity.

The Negroni was invented at Caffe Casoni in Florence, Italy in 1919. Count Camillo Negroni asked the bartender, Fosco Scarselli, to strengthen the Americano. Negroni told Scarselli to add gin to his Americano instead of soda water and to replace the lemon garnish with an orange garnish. Negroni fell in love with his creation and it soon became one of the most popular drinks in Italy. Negroni’s family took advantage of the drink’s popularity and created the Negroni Distillery in Treviso, Italy. The distillery produced a ready-made version of the drink and is still open today. 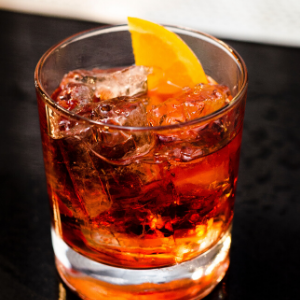 How To Make A Negroni

There are different theories on who invented the mojito. Some believe it was created in the 19th century by African slaves who worked in the Cuban sugarcane fields. Others say that it was created by Naval Officer Sir Francis Drake while he was in Cuba. What we do know is that mojitos began to gain popularity in Havana, Cuba in the 1900s and it’s now one of the most popular cocktails in the world. 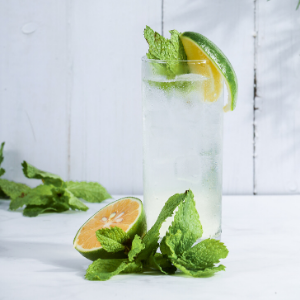 How To Make A Mojito

Muddle lime juice, simple syrup, and sugar in a Collins glass. Add mint leaves and mush them to the side of the glass. Fill glass with cracked ice. Pour rum and club soda or seltzer. Stir ingredients and serve.

A Collins glass has a tall, slim look and is used to prevent ice from falling out of your delicious cocktail. These glasses are typically 10 to 16 ounces in capacity.

The whiskey sour was created by Vice Admiral Edward Vernon of England in the 1700s. He mixed ingredients to help his crew recover from scurvy and other seasicknesses. He watered down the liquor to prevent crewmembers from getting intoxicated and used limes and lemons to help prevent scurvy.

How To Make A Whiskey Sour 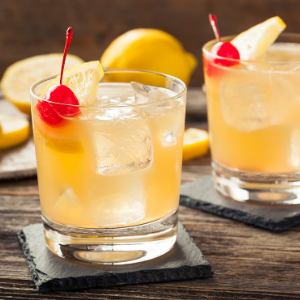 Old fashioned glasses have a wide brim allowing you to easily pour the sour whiskey into the glass. The size of these glasses usually ranges between 6 to 10 ounces in capacity.

Jennings Cox, an American mining engineer, created the daiquiri during the Spanish-American war because he believed lime and alcohol would protect his workers from getting yellow fever. He invented this sweet drink in a small village in Cuba called daiquiri which is how the cocktail got its name. 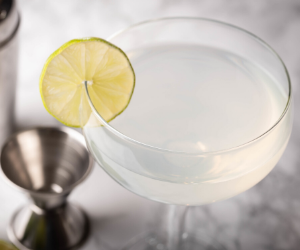 How To Make A Daiquiri

Cocktail glasses are typically available in sizes between 3 to 8 ounces. The glass has an inverted bowl cone shape that allows you to effortlessly get close to the surface to enjoy your drink.

No one really knows how margaritas were invented. What we do know is that margaritas are one of the most popular drinks in America and Mexico and there are a number of variations of the drink. For example, many individuals like to replace the salt on the rim of the margarita glass with sugar to make their drink sweeter. Others like to add fruits like peaches, mangos, or pineapples to provide their drinks with a more tropical feel. 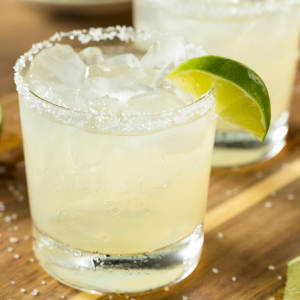 How To Make A Margarita

The wide rim of the glass allows you to add extra salt, sugar, or garnishes to margaritas to give your drink additional flavors. The size of margarita glasses typically ranges between 6 to 20 ounces.

Victor Bergeron created the Mai Tai at his restaurant located in Oakland in 1944. He had some friends in town from Tahiti and came up with the idea of making a new drink for them. One of Bergeron’s friends took a sip of his invention and said it was excellent. In Tahitian, the word “excellent” means “maitai” which is how the drink got its name.

How To Make A Mai Tai 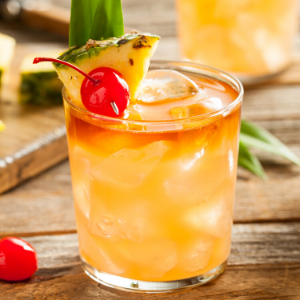 The highball glass has a thick base to keep the glass balanced and prevent spills. The size of these glasses usually ranges between 8 to 12 ounces in capacity.

Fernand Petiot invented the Bloody Mary in 1921. He was working at a bar in Paris and created the drink on the spur of the moment. He saw he had tomato juice and vodka and decided to mix those two ingredients together. Petiot and the patrons at the bar liked the drink and decided to call the beverage “Bloody Marry.”

How To Make A Bloody Mary 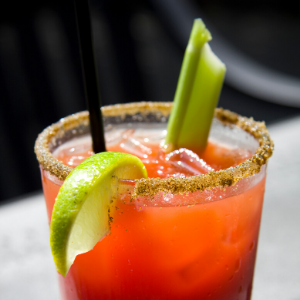 Put some salt on a plate. Rub a lime wedge along the lip of the highball glass. Roll the outer edge of the glass into the salt until it’s fully coated. Fill the glass with ice and set it aside. Add your ingredients into the shaker. Shake well. Strain into your prepared glass.

Highball glasses have a thick base to prevent ingredients from spilling and can typically contain 8 to 12 ounces in capacity.

There is not a confirmed story on who created the Manhattan cocktail. However, there is a popular belief that the drink was created by Dr. Iain Marshall for a banquet in honor of presidential candidate Samuel J. Tilden. The drink became a hit by the end of the night and people from that banquet began to order it at other clubs and bars. They would ask servers for the “Manhattan” which was the name of the club where the banquet took place. 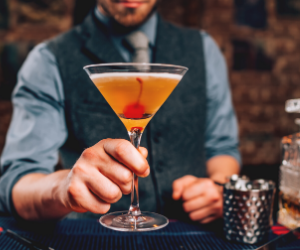 How To Make A Manhattan

Place all the ingredients in a cocktail shaker. Shake well. Strain the drink into a cocktail glass.

The size of cocktail glasses usually ranges between 3 to 8 ounces in capacity. It’s flared design allows you to effortlessly smell and taste your drink. 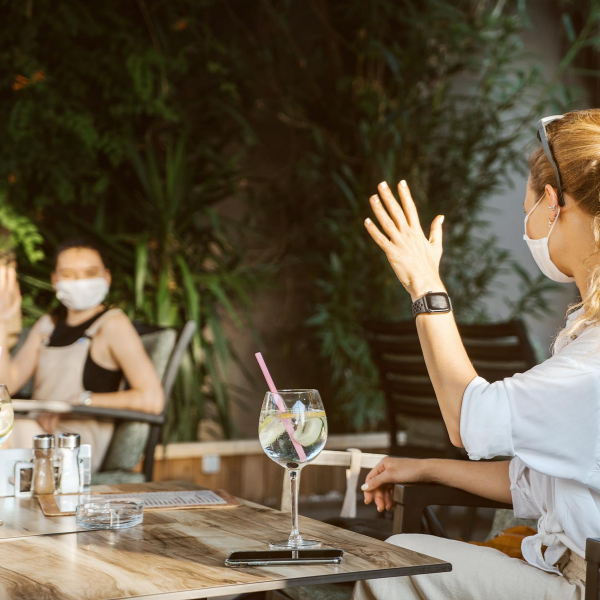 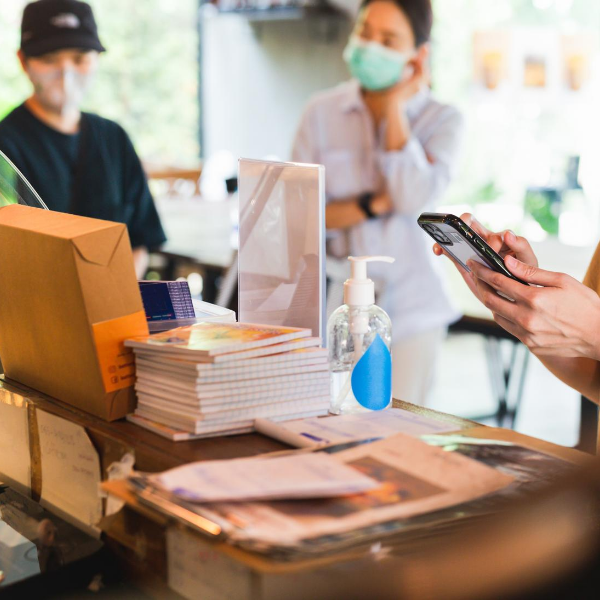 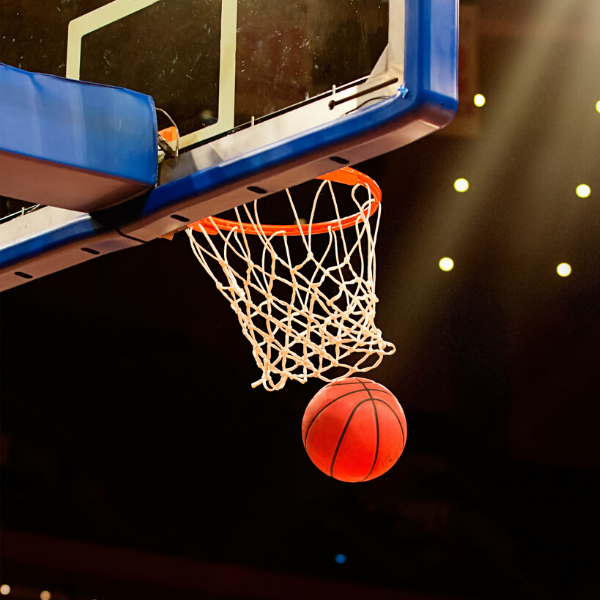 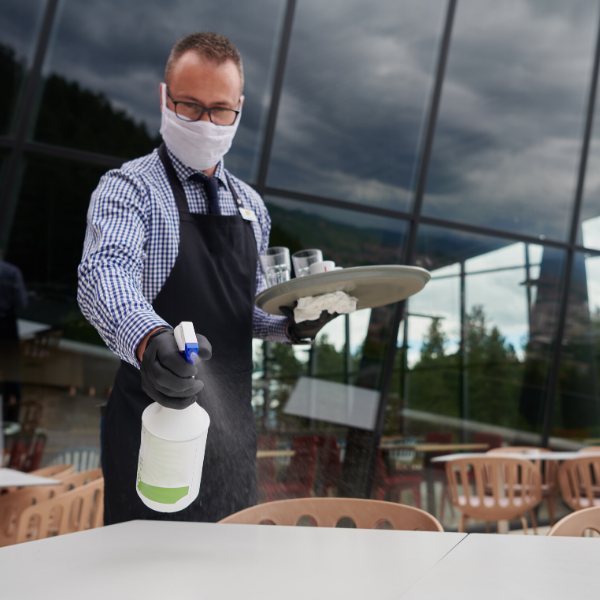 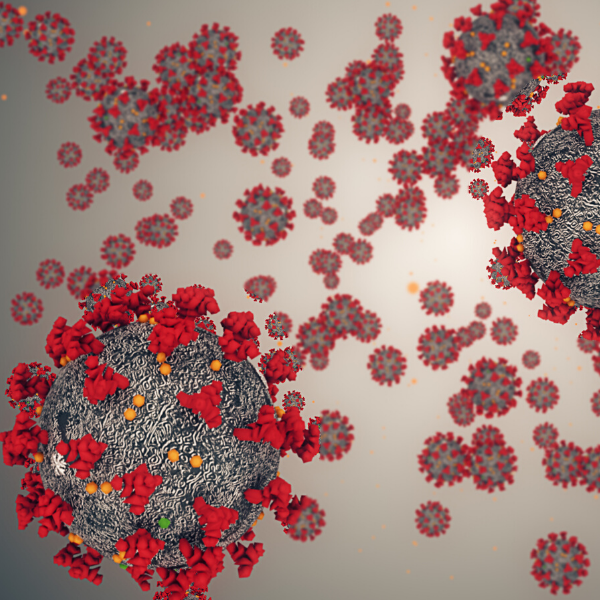